Japan has one of the most advanced and modern rail systems around the world. When you travel to Japan, you should take advantage of this rail system.

The Japan Rail Pass (ジャパンレールパス), also called the JR Pass, is a rail pass for only overseas visitors sold by the Japan Railways Group, and is valid for travel on all major forms of transportation provided by the JR Group in Japan, with a few exceptions.

The Rail Pass is designed to stimulate travel and tourism throughout the country. It is only cost effective for long-distance travel, particularly by bullet trains. While the savings from extensive travel can be considerable, those who travel too little may in fact lose money on a rail pass.

The Japan Rail Pass is of limited use within the big cities. For Tokyo for example, it does cover the Yamanote Line which goes to several popular tourist areas as well as in Osaka on the Loop Line, plus in Kyoto on the Nara and Arashiyama Lines. 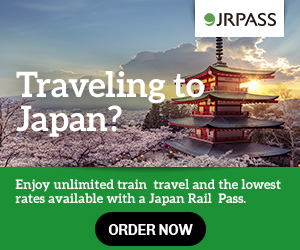 The Japan Rail Pass is also available through some international travel agents.

The Shinkansen, meaning new trunkline, but colloquially known in English as the bullet train, is a network of high-speed railway lines in Japan. Initially, it was built to connect distant Japanese regions with Tokyo, the capital, in order to aid economic growth and development.

There are different types of trains and services which run on each of the Shinkansen lines. There are express trains which are the fastest, semi express trains, and local trains.

For instance, on the Tokaido Shinkansen line, which links Tokyo to Osaka, the express train makes six stops, the semi express makes between seven and 12, and local trains stop at all 17.

The Japan Railways Group, more commonly known as JR Group, consists of seven for-profit companies (6 passenger lines) that took over most of the assets and operations of the government-owned Japanese National Railways on April 1, 1987.

The Tokyo subway is a part of the extensive rapid transit system that consists of Tokyo Metro and Toei Subway in the Greater Tokyo area of Japan. While the subway system itself is largely within the city center, the lines extend far out via extensive through services onto suburban railway lines.

The Yamanote Line (山手線 Yamanote-sen) is a railway loop line in Tokyo, operated by East Japan Railway Company (JR East). It is one of Tokyo’s busiest and most important lines, connecting most of Tokyo’s major stations and urban centers, including Marunouchi, the Yūrakuchō/Ginza area, Shinagawa, Shibuya, Shinjuku, Ikebukuro and Ueno, with all but two of its 29 stations connecting to other railway or underground (subway) lines.

Between Tokyo and Shinjuku 東京駅ー新宿駅

The Chūō Main Line (中央本線), commonly called the Chūō Line, is one of the major trunk railway lines in Japan. It connects Tokyo and Nagoya, although it is the slowest direct railway connection between the two cities; the coastal Tōkaidō Main Line is slightly faster, and the Tōkaidō Shinkansen is the fastest rail link between the cities.

The Chūō Main Line connects Tokyo to Shinjuku by direct route instead of having to go around the loop, Yamanote Line.

Japanese Online is a product of Pacific Software Publishing, Inc.